Do you have a marketing plan in place for 2013?

It happened again—maybe there’s something to this! 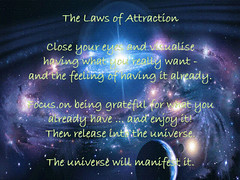 It happened again. I spent money on something I really wanted even though I was nervous about the expense. A few of my friends had told me about getting an Opensky credit card to pay with when I purchase these expensive items. Using a credit card would allow me to pay for the product later on, meaning that I wouldn’t have to spend my money right there and then. That’s the good thing about credit cards, however, I recently started considering the Laws of Attraction when purchasing expensive items. Weirdly, after I purchased that item, I received unexpected money afterward. This has been happening ever since I started practicing the principles from the Laws of Attraction. They are really about trusting the Universe/Source/God to give you what you need, understanding how money flows, and your attitude.

Do you tend to cringe when you spend money? I did. Before my study of the Laws of Attraction, I would deliberate on expenditure, then feel bad after I purchased it, especially if it was for myself. Then I would worry if I made the right decision and how I was going to justify and pay for the expense. Going shopping was a painful experience, a struggle of emotions, and my attitude really took the fun out of it.

After practicing the principles of trusting the Universe and knowing that money naturally flows in and out, in and out, it started happening. I would find something I wanted and my attitude would be, “Well, I don’t know how I’m going to pay for this, but I’ll find a way.” And then, money would come to me that I wasn’t expecting. At first, it would be paychecks from my husband’s business that I wasn’t aware of or extra amounts that I wasn’t expecting, but later it was sales from my business, inheritances, and extra client requests.

I can remember when I just wished I had a back-up stash of money in the bank and eventually it happened. It seemed like I was too focused on spending money than knowing how to save it. I knew I needed to put some money aside, but it just never happened. At the time, I was just wishing for a quick and easy way to make more money so I could save it, and that’s when my friend told me to read this Lifepoints review, to see how completing online surveys could provide me with easy money. But before I even had the chance, I finally had more money making its way into the bank. What a relief. As I managed my extra money carefully and practiced more Laws of Attraction, including gratitude, I was able to start saving money and have that money in the bank. However, as you can never have too much money saved, I continued to look for other ways to save more money. Life is so unpredictable, you never know what expensive bill or repair might be around the corner, so it’s important to have enough money saved for that. I heard from a friend that another way to save some money was by switching utility providers. She said that a lot of people are actually paying a lot more than they need to on their energy bills, so she suggested that I keep an eye out for other suppliers who might have a better deal. Energy bills are expensive, so I should really look to switch mine. That might save me some money every month that could be in my savings. My friend said that I could find out more here by visiting the usave website. Maybe I’ll look into that, it’s so important to keep your savings healthy and ensure you’re not overpaying and wasting money.

That brought everything to a whole new level because I could buy something, knowing that I could pay for it. Shopping became more interesting and more fun. At this level, after I bought something, and I felt really good about it, the next day or two would bring in some unexpected revenue…like a royalty check in the middle of the month that normally only came at the end of the month, or a gift from a relative. The key here is the feeling—feeling good about spending money attracts more of it, because money likes to flow.

But you have to start the ball rolling yourself. I allowed myself to be happy to pay for something when I was still having trouble attracting money. I changed my attitude first, then the money flow changed.

In conclusion, practicing the Laws of Attraction is about trusting the Universe or Source energy, understanding that money flows, and that your attitude is very important in attracting what you want. I’m on a very different financial level from when I started, but I made it here, and so can you.

If you’d like to know more about how to apply those principles and how I did, you can do so in my book, Money Mindset Makeover” here.

This site uses Akismet to reduce spam. Learn how your comment data is processed.