If you think you can’t, think again 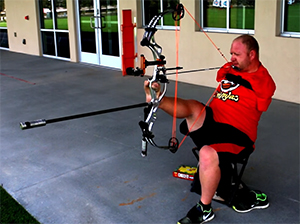 If you think you can’t, think again. I know you’ve probably heard of many cases where people have overcome what seemed to be insurmountable obstacles. But I was recently at an awards banquet in our small Iowa town and one of the award recipients was someone I had never met, but who impressed me just the same. He is known as the armless archer and I want to tell you his story.

Matt Stutzman is a member of the 2012 US Paralympic Archery Team. He won a silver medal at the Paralympics in 2012. He is currently also the world record holder for longest accurate shot in archery. But he started out with no laurels — just no arms.

Born without arms, his biological parents didn’t think they could afford all the expenses involved in bringing up a handicapped child, so they gave him up for adoption. Whether they explored all of their options, such as crowdfunding, and couldn’t find a solution or whether they just couldn’t face bringing up a handicapped child is not clear. A family who had a farm adopted him. These parents must have seen how determined he was to live without handicap help and had such a positive mindset, because his father told him he had to learn how to milk cows. He asked his father how he could possibly milk cows without arms, and his father said, “Just figure it out.” So he learned how to milk cows with his feet.

Fast-forward about 20 years, Matt is married with children and he wants to support his family but can’t find a job in the new town they have moved to (my town). He told his wife he decided to be the best archer in the world! He wasn’t sure what made him pick that but he got a special bow and started practicing. He entered a Paralympic tournament. He was terrible. He hired a coach. He got a little better. He entered more tournaments. He kept practicing getting coached and he got better and better.

Do you begin to see a pattern here? He had a dream of a career he knew he would love. He didn’t quit when it looked too hard. He hired a coach. He kept going until one day he won a contest, then two, then three.

He now supports his family with his archery through winning tournaments and doing commercials. (See the one he did for “Cheez-It” here.) He said this all happened in just a few years. His home is not adapted for his handicap—his choice—he just wants to feel “normal.”

At the end of his short acceptance speech at our banquet, he said this:

“If you think you have an obstacle that you can’t overcome, think again. Look what I have accomplished with no arms.”

So I just want to remind you that you have everything you need to succeed—just like Matt did. It may seem like as soon as you become an entrepreneur all the obstacles come up for you and it’s hard to keep going when you don’t know for sure how it will all turn out. Matt saw his obstacle of no arms as an opportunity to do something wonderful. You can do the same. It just takes a positive mindset.

You have a dream of your own lucrative coaching business. Invest in the things that can help you, including hiring a coach. Spread your message. Find the people who need your help. Take your talents, your gifts, and your skills and do something wonderful! If you think you can’t, think again.