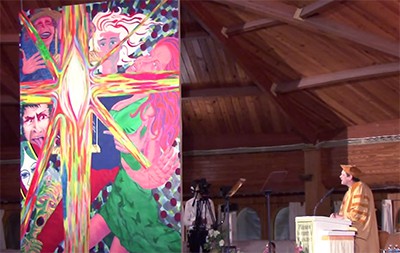 When I heard that actor, comedian, author, and producer, Jim Carrey, would be giving the commencement speech at Maharishi University of Management, in Fairfield, Iowa, where I live, I was hesitant to go because I have always thought of him as a goofy guy who will do anything for a laugh. How could you possibly take a guy like that seriously?  But I went because I was curious as to what he would say.  Of course he was funny and entertaining as expected, but that day I saw another side of Jim Carrey that was not expected.  Not only was I surprised and delighted at the depth of his thoughts about life, but also I was moved, inspired, and excited by his understanding of metaphysics, spirituality, and how he uses the Law of Attraction to create a successful life.

In fact, I was so inspired that I wanted to share some insights from Jim Carrey with you, because his speech could have just as easily been written for an audience of aspiring entrepreneurs as a group of college graduates.

He is a success story himself…he has made 40 films, including some as a producer; his films have grossed over $3 billion dollars in revenue; and he has made 100’s of thousands of people laugh.  And as we all know, laughter reduces stress, exercises the lungs, improves mental health, radiates positive energy, and “is the best medicine.”  So technically, he’s improving his audiences’ health! Jim also created a foundation, The Better U foundation, which is dedicated to promoting sustainable agriculture to end world hunger. How did he do all of this?

Well, one thing he said that stuck me as rather profound was that for years, he tried to figure out who he really was…behind the fame, behind the act.  What he discovered was that he was just pure consciousness, and he had been given a body or vehicle (“a rather sporty one!”) so that consciousness could amuse and entertain itself. Pretty deep from the “funniest man in the world,” as he has been called.

One word of advice Jim gave to the graduates was to not succumb to fear.  Fear is from the ego, which is trying to get you to do things so you can leave a mark and become immortal.  But the thing is, the ego is tricking you into going after something that you already have…immortality, since pure consciousness is immortal.

His powerful speech intermingled words of encouragement with humor in his own uniquely creative style.  Here’s one example: “So many of us choose our path out of fear, disguised as practicality.  What we really want seems so out of reach and ridiculous to expect, that we never ask the Universe for it.  But I’m proof that you can ask the Universe for it.  And if it doesn’t happen right away, it s because the Universe is so busy filling my order!”

Sharing personal insights, Jim said that the lesson learned from his father, a comedian himself who choose the conservative path of accounting and lost his job when Jim was 12, is that you can fail doing what you don’t want, so you might as well take a chance on what you do want.

He also gave some Law of Attraction advice to the graduates, which he obviously uses to create his phenomenal success. He said to dream big, then let the Universe know what you want, working towards it and letting go of how it comes to pass.  “Your job is not to figure out how it’s going to happen, but to open the door in your head, and when the door opens in real life, just walk through it.”

His motto is “Life doesn’t happen to you, it happens for you.”  Jim then said that although he didn’t know if that was really true, he makes a conscious choice to perceive challenges as something beneficial, so that he can deal with it in the most productive way.  That’s good advice for entrepreneurs, because we get challenged every day. How we handle them is our choice. How they turn out is a result of our choice.

A final word of wisdom from Jim is something I hear almost every high profile coach tell their audiences in a myriad of ways…”Risk being seen in all your glory.” The funniest man in the world took the time to share his profound understanding of life with 285 graduates at a small town university and changed our impression of him, as well as ourselves forever.

It’s hard to imagine Jim Carrey as speechless, but that’s what he was when he received his honorary Doctorate in the Performing Arts from the university. But true to his resourceful and amusing nature, he went on anyway and gave some parting advice…”Let’s Party!!”